The democrats are stupid, but the republican are also stupid. The whole government is stupid. The only way to fix this is to flush them all down the toilet at this point.
Click to expand...

The argument I've gotten from those that voted Trump without actually being into the cult of personality was, "We're completely fucked anyway. Voting Democrat just prolongs the agony. The Republican party has the plan to send us to death quicker."

Honestly, watching the hearings is making me think they're right. All of this shit happened. And not a single fucking moment of it will matter at all except for clickbait articles decrying the death of Democracy, as the crowd cheers on.

Glades said:
How is he not? Because he is pro-2A? Being anti-constitution, anti-bill of rights, anti-America is not a concept of traditional liberals. All Americans, left and right, used to see eye to eye on these. It’s only modern leftists (socialists, nazis, fascists, communists) that preach these concepts.

He is pro-abortion, pro-gay rights, pro-drug. How is he not a classical liberal again?
Click to expand...

I believe "libertarian" is the word you're fishing for.

nightflameauto said:
Not saying I'll go Republican anytime soon, but the Democrats need to give me something to vote *FOR* rather than against, or I'm gonna have a hard time thinking my trashed votes on the national level matter. Which they don't, since this state will bleed red until it kills itself.
Click to expand...

I mean, establishment and progressive Democrats may have different ideas how to get there, and then we have to contend with baaaaarely Democratic votes like Manchin and, somehow, Sinema as part of ourt 50-vote coalition in the Senate, but basically Democrats are for taking action on climate change, for protecting the rights of women, black americans, LBGT+ individuals, and minorities of all stripes, for gun control, for a tax structure that causes the weathiest Americans to pay taxes at a rate more in line with the middle class, and for strengthening the separation of church and state.

The Republicans, meanwhile, are against whatever the Democrats happen to be for, indiscriminately.

I kind of have to wonder here what this conversation would be like today if the Democrats had a 52 or 53 vote majority in the Senate, and the 20-30 or so vote majority in the House, that they were expected to have coming out of 2020, instead of holding both chambers of Congress by the skin of their teeth and having essentially ungovernable margins given the diversity of their coalitions.

Shred till your dead

Glades said:
He is pro-abortion, pro-gay rights, pro-drug. How is he not a classical liberal again?
Click to expand...

Down in the Everglades

Honestly in general, my opinion (and only mine as a kind of disclaimer) is this idea of "where's the sensible middle that doesn't like either party" is shit. Yes the Republican party is worse than Democrats, but even I'll call them "mainstream" Democrats like Biden/Hillary/basically everyone not named Bernie Sanders who is elected higher than like small town mayor is muuuuch more similar to Republicans than any leftists.

Especially in regards to non-identity issues, stuff like "inflation and the economy sucks right now and the Democrats and Republicans don't have solutions, I'm going middle" is an incorrect view, the issue is both of them aren't going left enough.

I mean FDR was on paper the most left president we ever had and look how America post WWII until like Reagan definitely, LBJ arguably was the closest it's ever been to a true "American Dream". And the only reason the New Deal was even passed was because actual socialists had a much stronger presences/could have actually threatened to have a large place at the table in National and State politics that the New Deal was just the actual kind of "meet in the middle" I can get behind.
Click to expand...

Maybe historically, but SpaceDock has a point:

Well, no, not really. Have you taken a civics class, like, honestly? Because that's not what any of those words formally mean, like at all.

The political right is the worldview that traditions are more important in defining our social norms than new ideas. The political left is the opposite of that, which places little value on tradition and desires to seek out new social order based upon some non-traditional plan or system.

This is wrong for a couple reasons, but not the least of which is that it's self-contradictory. "Nazis/fascists are right wing in Europe... Fascism and Nazism are perfect examples of extreme large socialist federal governments." So, socialism is right-wing too now?

I think it became increasingly hard to associate right wing American politics with small government after the George W. Bush years - the Patriot Act was one of the largest expansions of government power since... the New Deal, maybe? The modern GOP likes big government just fine, they just don't want to pay for it, so they can then bitch about the Democrats needing to make cuts elsewhere to afford social spending because of the size of the national debt, which they conveniently forget about when they're in office.

bostjan said:
The political left is the opposite of that, which places little value on tradition and desires to seek out new social order based upon some non-traditional plan or system.
Click to expand...

I'd generalize that even further and say that the political right seeks to return to a golden era in the past (that may or may not have ever existed in the first place, but that's besides the point), while the political left believes that we can build a tomorrow that's better than today. Progress versus preservation.

Drew said:
I'd generalize that even further and say that the political left seeks to return to a golden era in the past (that may or may not have ever existed in the first place, but that's besides the point), while the political left believes that we can build a tomorrow that's better than today. Progress versus preservation.
Click to expand...

I think you meant "right" the first time, but yes, those things kind of work hand-in-hand.

There certainly are a lot of dangers to going with left-leaning ideas to fix things that aren't broken. But we are quickly approaching a time when the political landscape of the USA is more broken than it has been since the reconstruction era

Where did you earn your degrees?

Both sides are corrupt and inept with regards to governance (here in the US)...they just pander to different segments of society to make them THINK they are working to make things better for them

ArtDecade said:
Where did you earn your degrees?
Click to expand...

I thought you couldn't get a degree from Trump University...I thought you just got a certificate for discount Trump water and Trump steak no?

There really needs to be a "Brutality" version of the like button here. Maybe with Baraka doing the slicing swords motions? 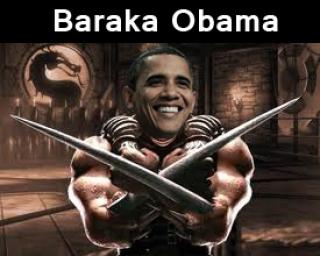 Rand Paul is a doctor js

Down in the Everglades

But the opposite happened. The SCOTUS (part of the federal government) rescinded its power to make a determination on such “right” and passed the power over to the people. The overturning of Roe vs Wade is an example of a shrinking federal government.
You must log in or register to reply here.
Share:
Facebook Twitter Reddit Pinterest Tumblr WhatsApp Email Share Link