soy burgers and soy chicken nuggets kick ass. I eat them all the time. They taste exactly the same and they have like 1/3rd the fat.

desertdweller said:
soy burgers and soy chicken nuggets kick ass. I eat them all the time. They taste exactly the same and they have like 1/3rd the fat.
Click to expand...

really? i haven't gone that far, but i may have to give them a try.

I grinded some nasty pork rinds today. Man that stuff is evil-but it tastes good..

nothing like a puffed up chunk of pig skin

And how about cream in your coffee?

Just because milk is inteded for baby cows doesn't mean we shouldn't eat it- hell, veal WAS a baby cow, yet plenty of people eat and enjoy that (let's steer clear of the humanitarian aspects- if you rather, a nice t-bone used to be a baby cow). It's a valid food product, whether or not it's particuarly good for you is beside the point- we use it and its various products (cheese, cream, etc) as a flavorful addition to our diet.

I'm not saying it isn't a good idea to limit your intake a little- too much of anything is bad for you- I'm just saying that nothing I've seen in this thread constitutes a reason to stop drinking it and eating its products altogether.

Incidentally, while a soy burger or soy nugget has absolutely no appeal to me, I LOVE gardenburgers. Do they taste just like a beef patty? No, but that's not the point- they're a very flavorful grillable alternative, and in my experience, it's a lto easier to make a good gardenburger than a good burger- my school served them at barbecues a lot for the vegetarians, and I'd usually opt for them over the burgers because the burgers were always overcooked, but a slightly overcooked gardenburger just got a bit crispy on the outside, which was nice.

i've never been a coffee drinker

no, drinking animal milk won't kill you, i've just found a suitable/healthier alternative to it.

i guess it's been a health kick as of late. i mean, i've been clear of smoking and drinking for about 7 years now, and have lately started regular exercise and trimming up my diet. both were going south lately

i just started the thread because i'm feeling alot better lately. is it all psychogenic? eh, could be

ahh. there, my friend, is your problem.

Drew said:
ahh. there, my friend, is your problem.

once as an undergrad i was talking with one of my grad student buddies. she asked me if i'd like some coffee that she had just made, and i said, "thanks but no thanks, i'm not a coffee drinker." to which she replied, "the force is strong with you, but soon enough you'll join the dark and caffienated side."

though, i DO like my ice creams... i'm not sure how i'm going to work my way around that. maybe ice cream will just have to be my dairy vice

it's the only way to be. If you don't like coffee, you just haven't had a well-brewed cup (I grind my own first thing in the morning, and brew it in a french press- doesn't need cream or sugar, it's got a smooth flavor and great body as it is).

If you're ever in waltham, let me know- I'll get you hooked.

I'm not vegan or vegetarian, I just don't like milk. But I've been drinking various plant based milks for a long time. I don't think of them as "alternatives to milk" any more than any beverage is an alternative to a different beverage. I don't like any flavored soy milk, always plain/sweetened or sometimes unsweetened.

But to be honest, my new shit is oat milk. It's delicious, and ironically it reminds me of the taste of Wheaties. If you see some oat milk on the shelf you should grab that shit.

I've had pea milk. Tastes like soy milk, but it's more expensive. I don't hate coconut milk, but I also don't want to drink it. I put it in curry though! Unsweetened non-flavored almond milk not bad, and I used to grab it when I go shopping, but now I get the oat milk instead.

So when I go to the grocery store, I usually buy milk (for my wife), soy milk, oat milk, and recently kefir... which actually is milk lol but it doesn't taste like it, especially because I get the flavored one... its like a dessert style yogurt drink I like to have when I get a sweet tooth.

Our kids have trouble with dairy so we’ve been doing the Silk almond milk thing, but they also make a cashew one that is pretty good. It’s a little harder to find.

There are threads here plausibly older than some members. Here's to feeling incredibly old.

Try goat milk. The fat in it is much smaller and it's easier to digest. Typically even some lactose intolerant people can handle goat milk without issue. It has a lot of other pluses over cow as well. American culture tends to be "ehhhhh" about "goat" though. We're so "Cow" oriented.

ferret said:
culture tends to be "ehhhhh" about "goat"
Click to expand...

Sometimes I wonder if some health fads are born from people just being mildly grossed out by the source of their food.

ferret said:
Try goat milk. The fat in it is much smaller and it's easier to digest. Typically even some lactose intolerant people can handle goat milk without issue. It has a lot of other pluses over cow as well. American culture tends to be "ehhhhh" about "goat" though. We're so "Cow" oriented.
Click to expand...

Have you ever let a goat? They're the worst things in the planet and I wouldn't consume their produce if it were a matter of life and death. Source: had two goats.

StevenC said:
Have you ever let a goat? They're the worst things in the planet and I wouldn't consume their produce if it were a matter of life and death. Source: had two goats.
Click to expand...

I have four, so yeah. 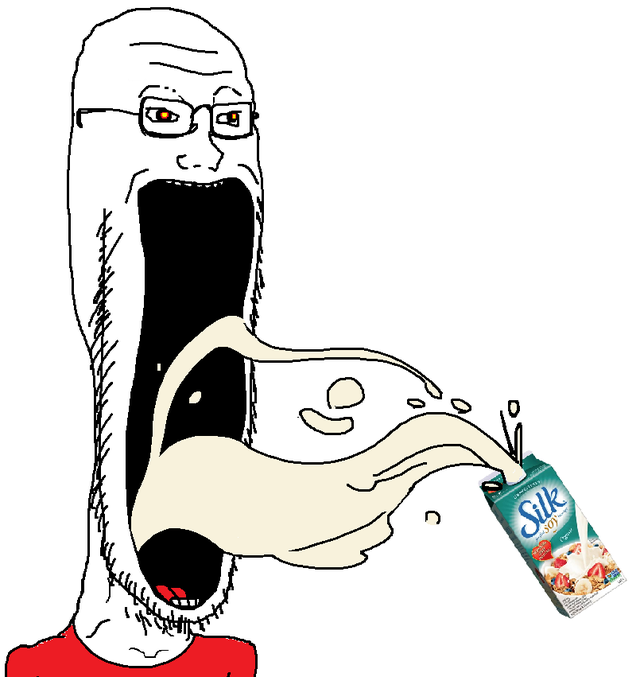