Fingers on the frets, pick the strings.

To play it while sitting, put the cutout of the V over your right leg.

Otherwise, what model RR did you get?

Tom foolery is my middle name. 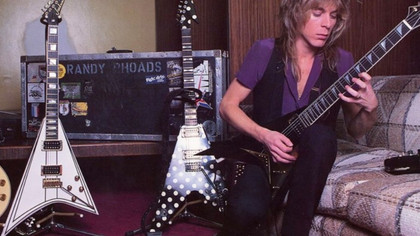 Play, in this order;

regular guitar stands don't work well with RRs, but there are good stands made for "extreme" shapes. If you don't have a stand that works well with it; I would recommend leaving the guitar in the case if you are worried about the wings getting chipped. I always carry mine one hand on the neck another on the tip of the longest wing / horn to avoid hitting the guitar.

WarMachine said:
Play, in this order;

Believer, Crowley, and Suicide Solution are my favorites Rhoads tunes to play and record, always either on my white Les Paul Custom or white Soloist. I guess I need to get a proper Rhoads V at some point....

I use Hercules hanging stands for my Rhoads Vs. I also have a cheaper triple hanging stand that works fine too. 5 Space Flying V Guitar Stand with the "Fold Flat Design"! Handmade wooden guitar stands from Allwood Stands Made from select AAA Red Oak, Cherry, American Walnut or Curly Maple (other woods available include Mahogany, Purple Heart, Lacewood, etc.) Our unique 'fold-flat design' makes for easy...
www.allwoodstands.com
Also plan on getting one of these at some point.

I used to teach with a Rhoads once in a while and it was fine in the classical position. You can get a rubber strip to stick on the underside so it anchors on your leg but I've never done it or found it necessary.

Not really sure what other tips you'd need other than the top wing is longer than you think. Look at 90% of used Rhoads to see what I mean.

Lada The Great said:
Put it in d standard and then Chidlren the bodem jau jau as they say in my homeland
Click to expand...

tedtan said:
To play it while sitting, put the cutout of the V over your right leg.

Otherwise, what model RR did you get?
Click to expand...

well, I went to my guitar guy and he said that his shop could get me one, but the eta was 6 months out. So, since I am already getting a Jeff Loomis this summer, I went with the JS32, in Ivory. from Amazon. It arrives Wen. next week. I wanted it this month, March, in honor of Randy's moving on in 1982, March 119. I know that is silly sentimental stuff, but when I first heard Diary of a Madman acroos the campus, I followed the sund until I found the source, needless to say, I have never looked back. fell in love with the guitar like never before, and set out on my path. I'm a big fan of Alexi, and have always wanted this guitar. It was buget friendly and had a Tremo, which I on't usally use, so here's for learning and growth in my skills. Just wondered about tunnings, strings, pick attack. I have been playing 7 string rom the start, so basically this will be my first 6 string, outside of a Warlock I had for a short time. also, I like the idea of holding it in a classical style, but not sure how that is going to work. is it comfortable to play?. all I really know is that I bought it in hoor of someone who really shaped my direction, so I am going to make it work for me!!!! Thanks everyone.
You must log in or register to reply here.
Share:
Facebook Twitter Reddit Pinterest Tumblr WhatsApp Email Share Link