StrmRidr said:
Confusion is also up on their website now. All videos will be available there so it probably is the best place to look.
Click to expand...

Main riff in this song is good.

I have the album preordered for release day... This is making it more and more impossible to go on a blackout until then.

I really struggle with what you guys see in this music? Second hand riffs predictable vocals poor leads and Lars. Ffs is the metal equivalent of America's got Talent.
Far worse than the new Megadeth or Testament albums. To give some ballpark comparators.

"Dream no more" might be my favourite of the new songs so far. And it seems more and more clear, if I had anything to say in that matter, they would only release songs that are either fast (as is "Hardwired") or slow as that one. At midtempo they're just boring.
As for the Megadeth/Testament comparison... haven't listened to a new Megadeth song in ages, but while the drumming and the drum sound on the new Testament is (in case of the sound, infinitely) better, the rest is, well, thrash metal. If you told me it's a rerecording of a 1987-song, I would totally believe that. Same with the new Slayer (which I liked a lot) and probably the new Kreator. Or more recent bands like Reactory. None of those are reinventing the wheel. If I'm looking for riffs that are not second hand, great leads and amazing lyrics, thrash metal is pretty much the last place I'll look at. Does that make it any worse? Not at all.
B

I like it all so far even more than I thought I would and for reasons that I didn't think I would. It's so groovy. I love the guitar tone as well. It sounds like the Black Abum and Load hooked up and had a baby called Death Magnetic that that later experimented with someone much older named AJFA.

I actually like midtempo songs even if this one is a bit basic. At least the album seems to sound good, I still wondered how a band with as much money as Metallica and whose albums litterally cost millions to make could endup sounding like Stanger and Death Magnetic. (Load and reload, although not my cup of tea, are well produced)

Ordered it from Amazon, I should get it in the mail tomorrow. First time I buy their stuff since the black album, was in my late teens then... now I'm a 43 y.o dude

The only thing that kept me watching that was to figuring out what guitar Hammet is playing. Appears to be a Jackson V.

JD27 said:
The only thing that kept me watching that was to figuring out what guitar Hammet is playing. Appears to be a Jackson V.
Click to expand...

My guess is that it's the same Jackson Rhoads that he's uses during live performances of Seek And Destroy.

I haven't seen all the clips yet, but I'm waiting for the one where Hammett pulls out the red ESP Gibson V copy. 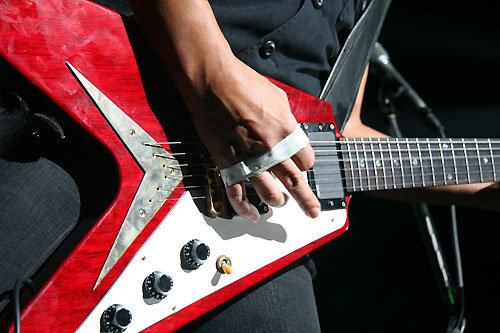 Bloody_Inferno said:
My guess is that it's the same Jackson Rhoads that he's uses during live performances of Seek And Destroy.

The black Rhoads is his D standard guitar, busts it out for S&D (yep, D std live) and Sad But True.
B

Halo On Fire is pretty awesome

I've seen about half of the videos so far and like what i'm hearing.
B

Bloody_Inferno said:
My guess is that it's the same Jackson Rhoads that he's uses during live performances of Seek And Destroy.

I haven't seen all the clips yet, but I'm waiting for the one where Hammett pulls out the red ESP Gibson V copy.

He uses the red ESP in the Am I Savage? video

Spit Out The Bone is killer too
J

I spent all morning playing and compiling my favorite riffs from the new album!
I really dig most of the songs!!!
What an exciting time for Metallica fans!

Here is my "best riffs" from Hardwired... To Self-Destruct !

Just watched all the music videos, I think "Spit Out the Bone" and "Moth Into Flame" are the strongest tracks. The mid tempo riffage doesn't bother me, but it's not why I listen to Metallica. Kirk is also a bit of a let down, imo. He even pretty much quotes his solo from "Suicide & Redemption" in one of the songs.

"Murder One" gets a special mention for having a kick ass video.

Overall, it sounds a lot like Death Magnetic minus some aggression and garbage production.

After listening to all of it, I must say I am very pleased. The only track that I really didn't enjoy was Am I Savage, but I only listened to it once so far. The Lemmy tribute was awesome.
B

potatohead said:
Spit Out The Bone is killer too
Click to expand...

James sounds ....ing great on Spit Out The Bone. When people ask what I see in this music, it's James Hetfeld. No other metal band gives me the aggression while sounding as good as James still does.