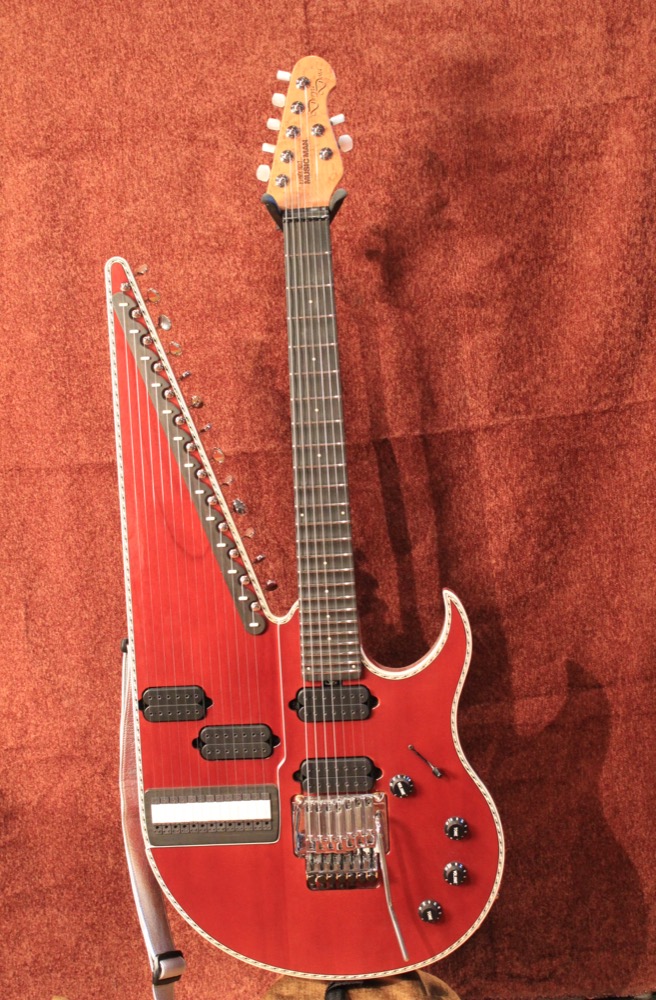 This guitar was custom built by Sterling Ball as a gift for Steve. It’s unique with a 7 string sitar style neck and sympathetic resonating strings. The fact that it’s a 7 string, with a whammy bar, and a “Sitar damper” to create that choral sitar sound, makes this guitar a first of its kind. Steve uses this gitar on “Upanishads” from the record Modern Primitive.
Click to expand...

Just in case anyone wants any ideas in doing a build...

Just in case anyone wants any ideas in doing a build...
Click to expand...

Vai gets all the coolest stuff.

Is it my impressions or is that sitar-guitar full scalloped?

odibrom said:
Is it my impressions or is that sitar-guitar full scalloped?
Click to expand...

Looks like it has buzz bridge saddles on the sympathetic strings too.

Just the thought of what it'd cost a mere mortal like me to get a seven string floyd style sitar guitar bridge! Probably a down payment on a new car for something like that, plus at least as much worth of confused looks from whomever takes down the order.

Yep, out of my budget. But you can get pretty close with the string trick across the the strings at the saddles... 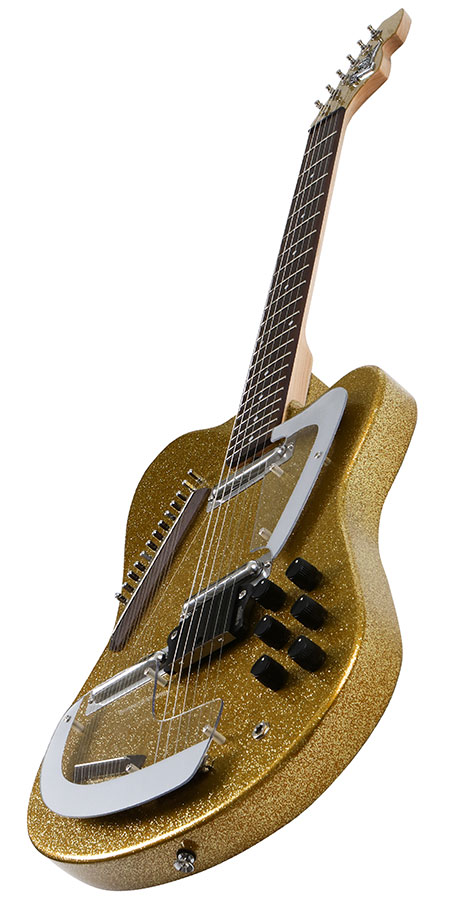 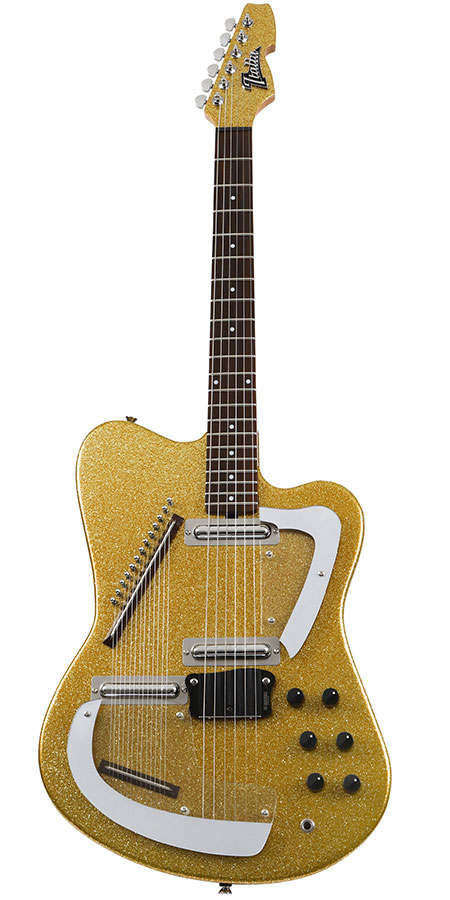 I'd say that the Italia isbetter than the Dano in every way, but still could use improvements.

I think my path forward is going to have to be DIY, unless EYB gets back to me and I find a cheap superstrat body.

That neck adjustment is some how reminiscent of old telecasters... Pain in the ass to adjust, one has to remove the guitar's neck... I wonder how in hell did they ever think of an adjustable fundamental part of an electric guitar not being accessible... Maybe to avoid Gibson's lawsuits? Maybe they thought it would work as set and forget kind of thing and forgot that creative people like to experiment? The Danelectro ones are also adjustable in the same manner, removing the neck...

By the demos I've seen on these, they felt underwhelming, the sustain loses it (obviously) and the overall tone ain't that interesting, king of a one trick pony imo. Went the rabit hole on pedals and sitar sounds, and revisited the Ravish Sitar from Electro Harmonic and it is kind of cool with that scale/pitch for sympathetic ringing... not suitable for my rig setup though, oh well, it's a shame...

Source Audio and Electro Harmonic are 2 brands that could eventually make a multi FX rack unit with all their crazy stuff in, that would certainly be welcome... by me at least... not sure there's a market for those...

Had to pester them a little, but EYB did get back to me. They are currently out of stock, but I plan to get one of their bridges once they are back in.

I'm thinking of taking one of my older, cheaper sevens, filling and redrilling for a six string bridge, replacing the nut, and maybe doing a DIY buzz bridge for a few chikari strings.

I tried restringing it just for shits and giggles tuned C3 G3 C4 F4, with three strings worth of open fretboard, and it's a lot of fun. I do really miss the chikari strings, though (those would, ideally, be tuned C5 G4 and either C4 or G5, obviously at shorter length). I think maybe the sympathetic strings arent that big of a deal. There's a lot of rattling of open strings, since the nut was slotted for strings twice as thick as what I currently have there, but that's an easy enough fix once I get a few minutes and a nut blank. Just gotta make sure I want to commit to this first.

Anyone here ever done a DIY sustainer before?!

Edit: a little bit of reverb and flanger seems to get the sitar vibe going, but the delay trick might be a little tougher to pull off. I think the buzz bridge is the definitive way to address this. If I can't land the EYB, I'll see if I can machine something myself once I have the time.

Maybe I can snag one of those 26.5" scale Jackson JS-22 seven strings, snag the EYB sitar-bridge (still out of stock), snag a couple of banjo tuners, and a graphtec nut.

Take the bridge off, take the pups out, fill the pup cavities, rerout the pup cavities a couple cm to the bass-side, install the EYB bridge so that strings 1-4 of the new bridge line up where strings 4-7 used to be, install the (2 or 3) banjo tuners in the second cutaway, drill holes for 2-3 more strings (maybe two chikari strings could share a saddle, like a 12 string guitar?), slot the new nut for four strings, and then install new pickups and give it a go.

And the materials would cost about the same as one of those Danelectros (maybe $100 more).

Anything in there that sounds particularly stupid or insane?

Or buy one of those guitar making kits.
Though that way, I like the idea of getting an old jackson or esp more. Its less hassle.

bostjan said:
I tried restringing it just for shits and giggles tuned C3 G3 C4 F4, with three strings worth of open fretboard, and it's a lot of fun.
Click to expand...

I did something related to this when i first became interested in Indian Classical Music (which was what first made me interested in alternative tonal systems).
At the time i only owned a 5 string headless bass (Hohner B2AV Steinberger copy).
Unlike a Sitar i wanted to be able to bend any string as much as any other, so i removed strings 2 and 4 to leave large gaps between the remaining 3 strings, then tuned them in fifths to regain some range, and at very low tension.
Unlike most fixed bridge guitars, this had quite good pitch stability for large bends due to being headless and using double ball end strings.

I just stumbled on a site called sitarfactory. They have a solid body electric sitar with some cool modernizing innovations. http://www.sitarfactory.be/

I don't have a table saw or any power saw for that matter, but maybe I can remedy that and justify the 400 usd saw purchase to save 100 usd on a body.

I would very much like to construct my own neck for the thing, so I can make the scale longer, but I have no idea what I'm doing in that department.

Having your neck def makes it worth it,deeply scalloped and tall frets are a must. Will Warmoth necks fit your budget ?
https://www.warmoth.com/Guitar/Necks/Warmoth/Vortex/ChooseConstruction.aspx

You can also look at Sitambura's for deisgn inspiration

So, I've decided to use my old Dean Avalanche 7 for this. I purchased an EYB Sitarbridge, two (so far) banjo 5th string tuners, a bracket and a piece of delrin to make my own redneck chakari string bridge, and a bunch of tools to try to make it happen. I might still need a pickup and some other pieces, but I've never taken on a task this big before for a modification, so, we'll see how it goes. Might be a monumental failure.

MY current plan is to remove the 6th saddle from the bridge, and hope I can shoot a double string course through the gap across the length of the body. If that works, I might add a lower chikari string across the body through the gap in the 5th string saddle and then add another banjo tuner somewhere on the neck.

My attention span is so short, though, I'm already thinking of how I can modernize the tablas and make them out of synthetic materials.

And I have no experience and no tools, so it'll look punk rock as hell.