Status
Not open for further replies.

One of my guitars is an Ibanez RGIR27BE "Iron Label" 7-string. It's a black one, from 2013, not like the "walnut flat" finish they're doing now. I liked the white binding around the body, fingerboard and headstock, but I sort of always wished it had some inlays. I had several of John Petrucci's Ibanez signature model, the JPM100, many years back, and always liked the look of its offset dot inlays. So I set out to install offset dot inlays in this guitar's fretboard similar to the layout of JPM10, but not exactly the same. I thought the JPM100's inlays got a little too small above the 12th fret. I ordered a bunch of pearl dots from StewMac in 6, 5, and 4mm sizes. With the guitar laid flat I tried out a few inlay layouts. What I liked best was 6mm dots at the 3rd, 5th, 7th and 9th frets, 5mm dots at the 12th (double), 15th, 17th, 19th and 21st frets, and two 4mm dots at the 24th fret. That layout looks like the JPM100's inlays but without disappearing as much in the upper frets.

Since I lack the proper tools (as well as the time, patience and confidence) to do the work myself, I looked for a local shop. I found a place called Guitar Groomer in West Hills, CA - not too far away. The luthier's name is Avi Shabat. The Yelp reviews were all 5-star and the photos of the other work he had done looked great, so I figured I would give him a shot.

We chatted over email a little bit and I described what I was looking for (including photos and diagrams) and he gave me a very reasonable estimate. I dropped the guitar (and inlay dots) off on Tuesday, 10/6/2015. He said to give him two weeks to get the work done. It only took him one week.

I picked up the guitar on Wednesday, 10/14/2015. I was immediately impressed. The inlay job is PERFECT! He also did a setup and fret dressing, so the guitar also played better afterward, with lower action and no fret buzz. String bending is now so silky smooth!

On to the photos! 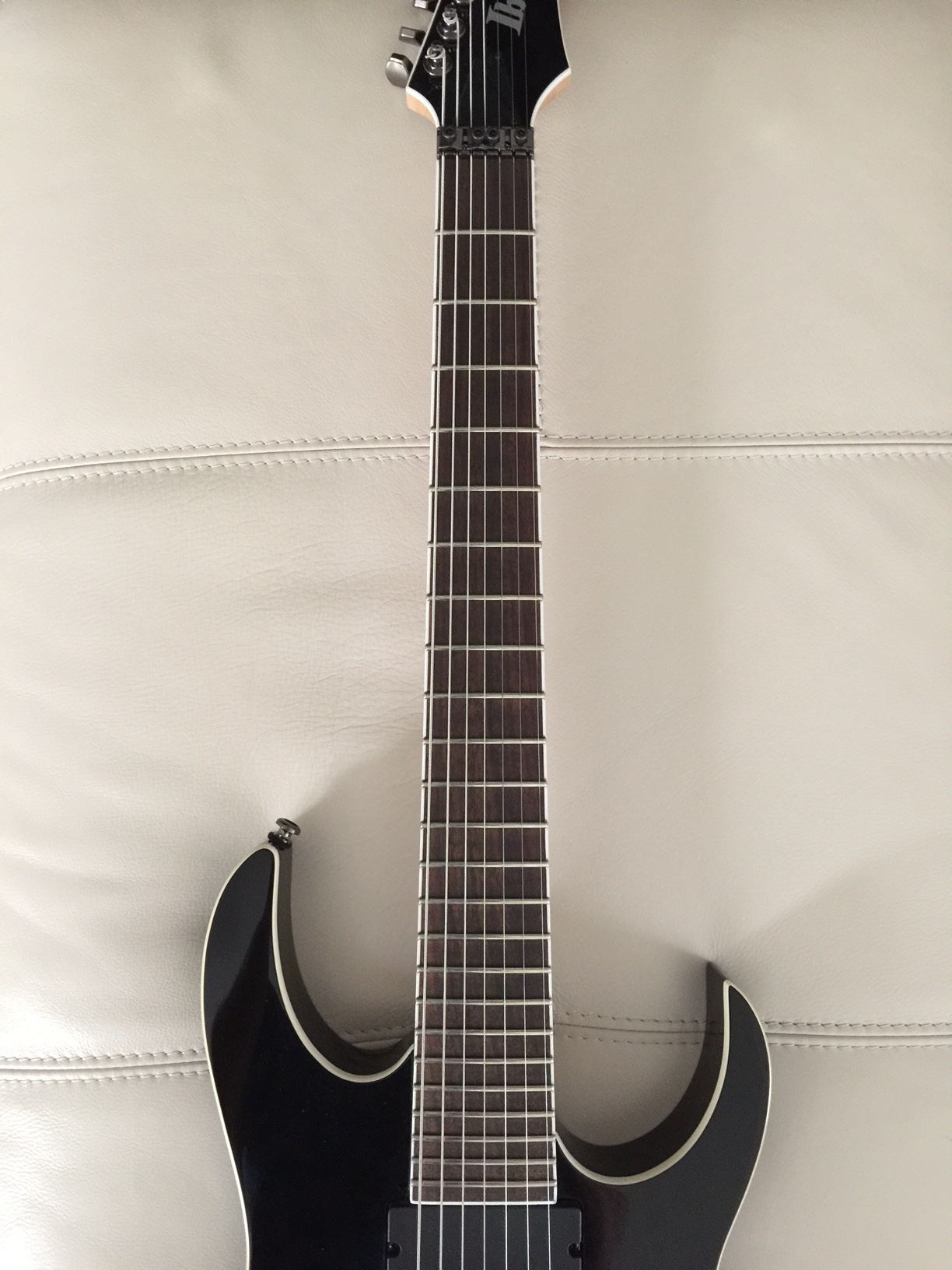 Here it is after: 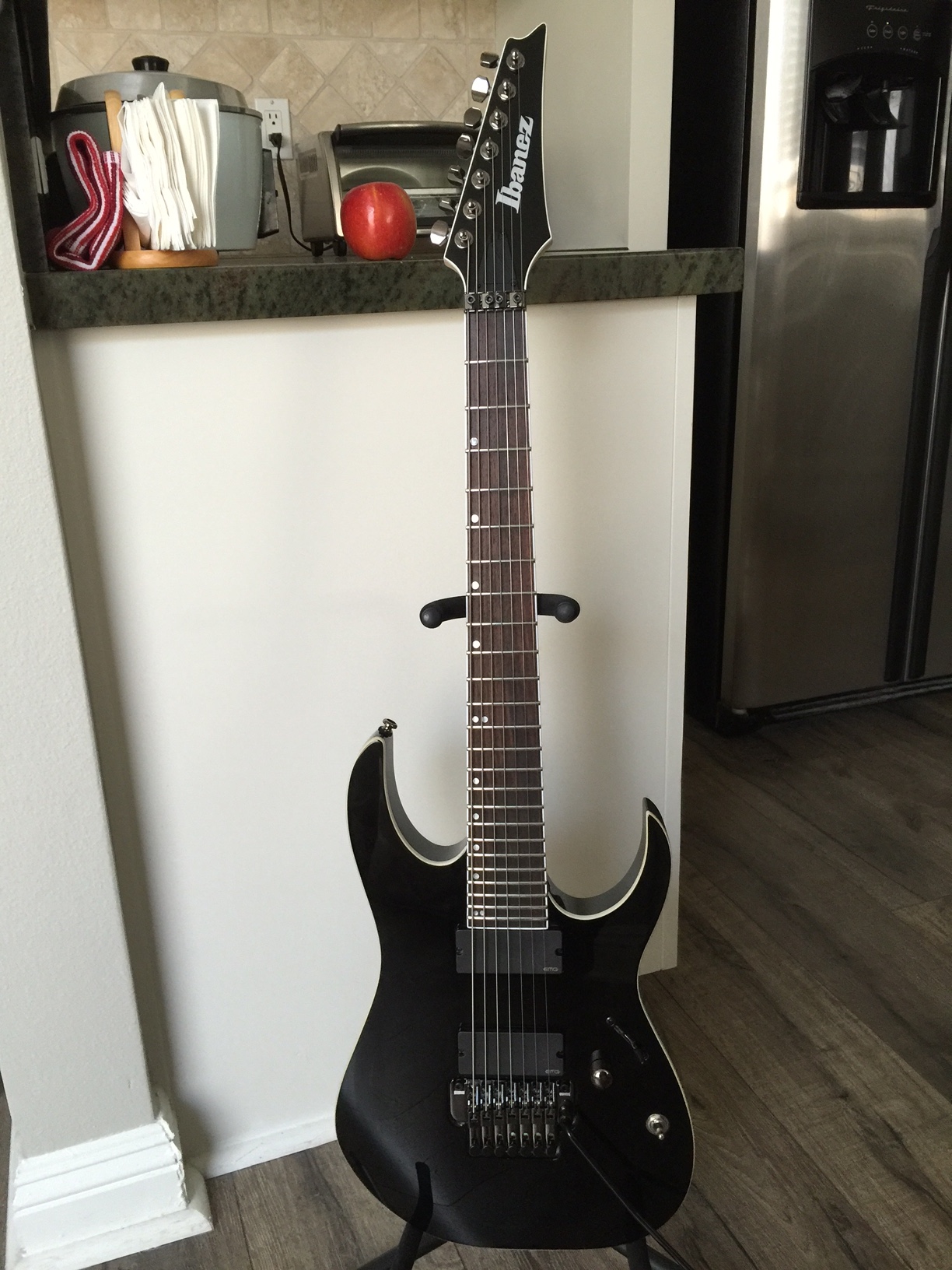 Close-up of the inlays: 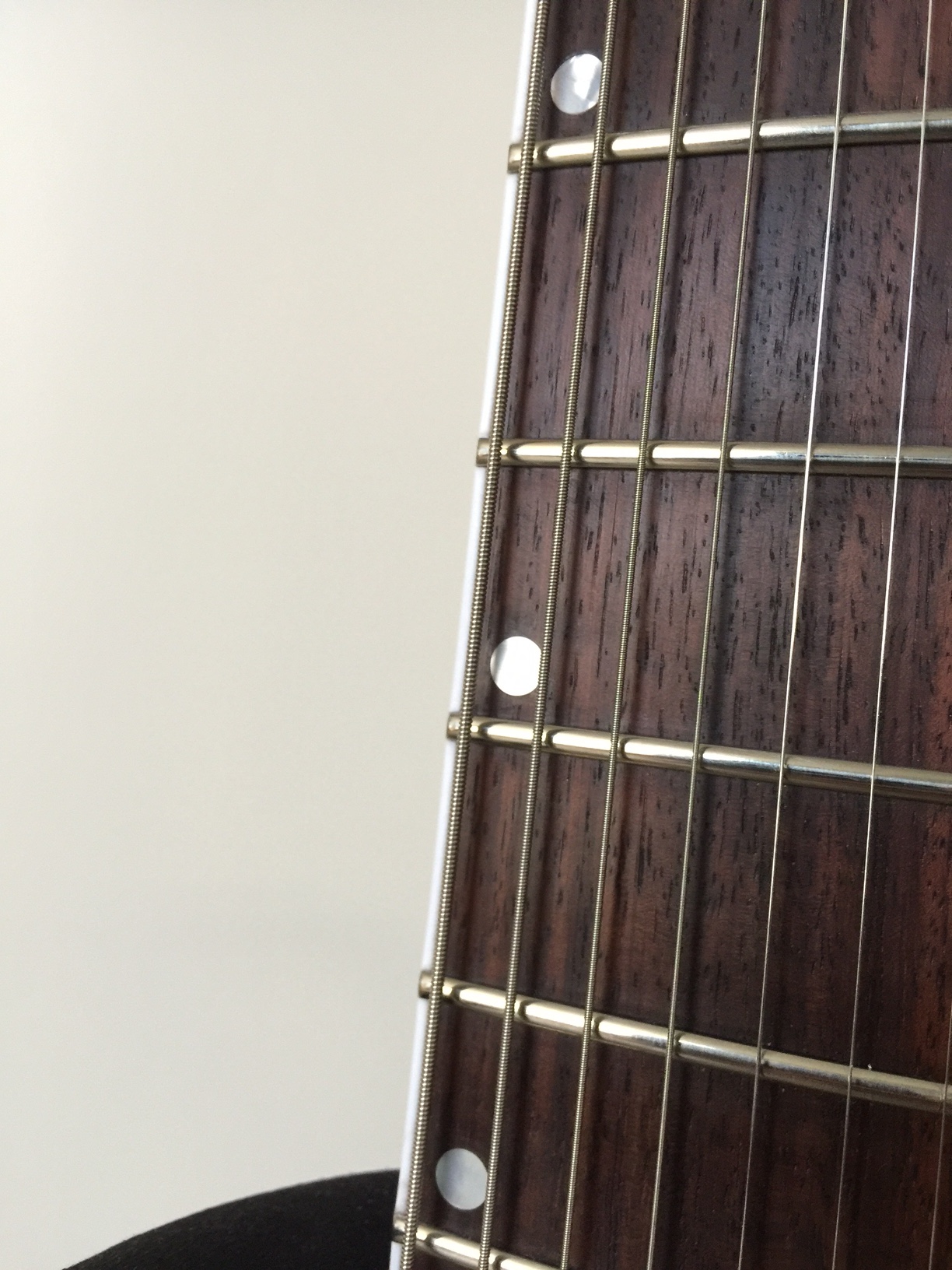 Running my fingernail over the inlay on the fingerboard - can't even feel it there!

Close-up of the double at the 12th fret: 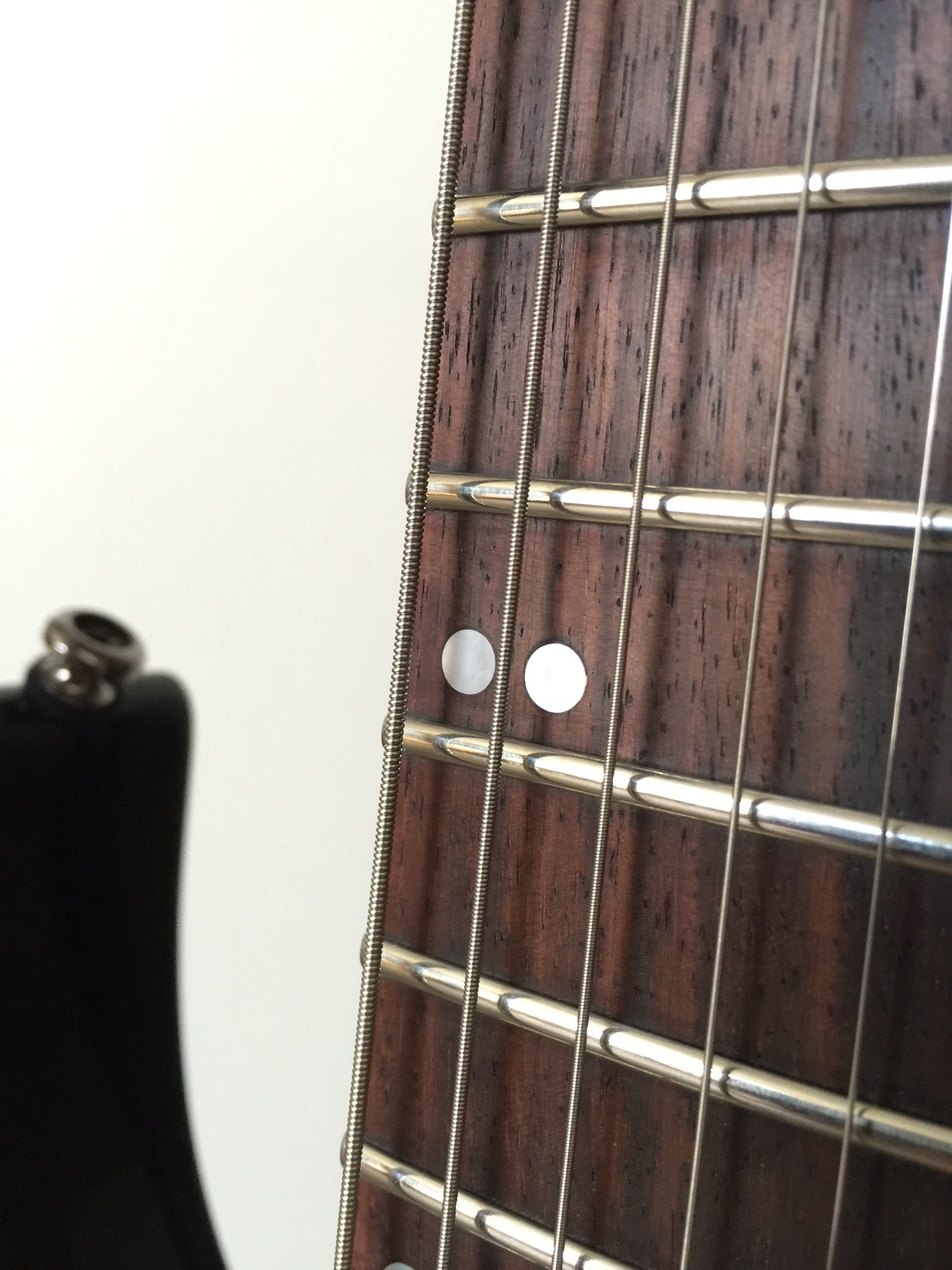 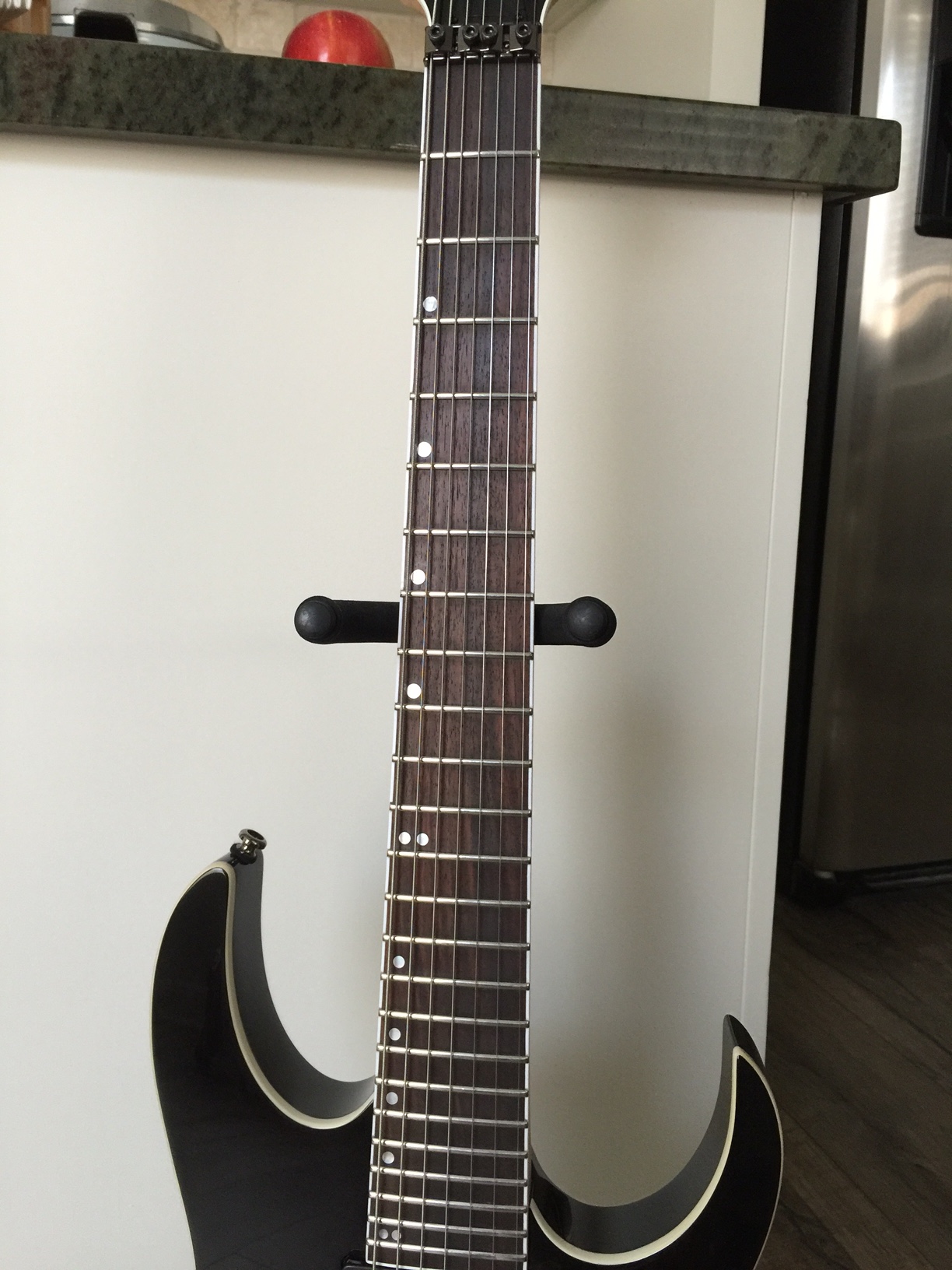 Close-up of the inlays & fret ends: 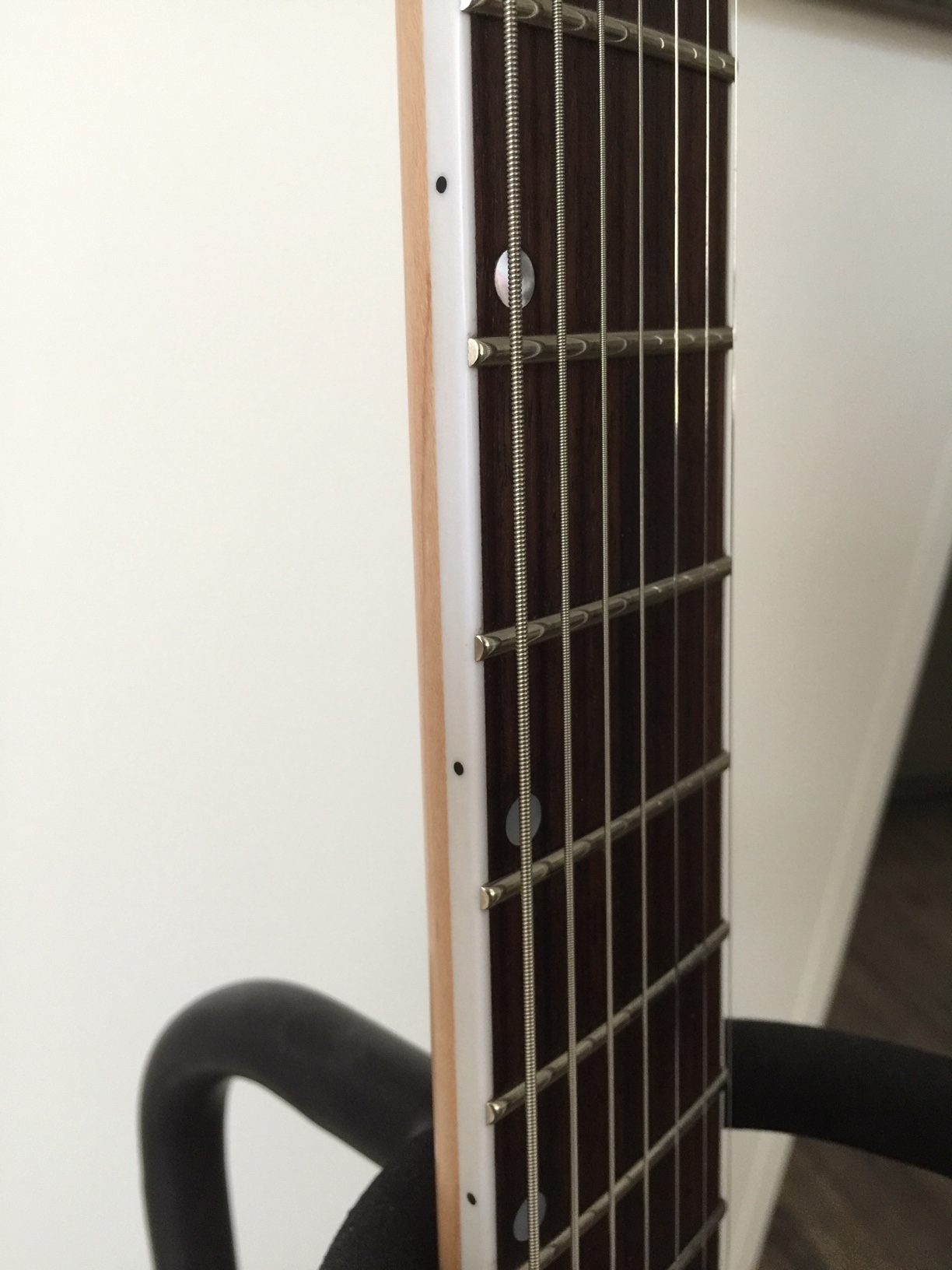 That's my story! If you've got one of these not-so-expensive guitars and are thinking about adding a simple inlay like this, go for it! It wasn't very expensive and I'm very pleased with the results.

This is not an easy job to get right.
I'd say your luthier did a bang up job here.
O

Anyway, even owning a JPM100 myself, if I had the chance to make my own fretboard inlays, I'd go for something unusual. I'm really fond of what they did with the Dargie Delight:

Wow, that came out really solid. The frets look superb too.
Inlays on a completed guitar always seemed especially 'scary' to me, seems like something with an extremely small margin for error.
M

That looks awesome. I dig it!
P

Looks like he did a great job!
I just wish it was trivial to go the other way around, actually, since for me the lack of inlays is one of the things I like about the Iron Label. There are lots of other guitars out there that I'd love to have if I could get rid of the dots.

Status
Not open for further replies.